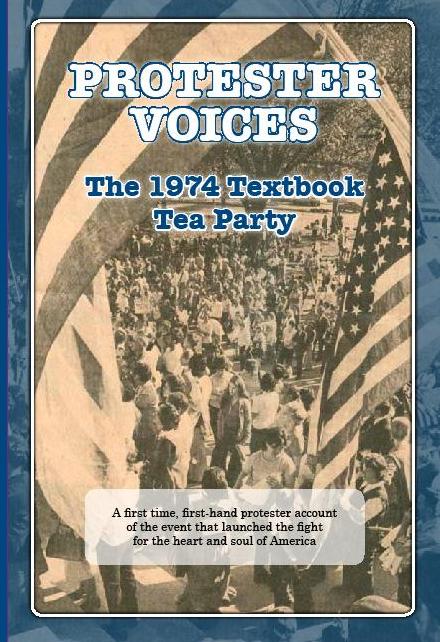 A first time, first-hand protester account
of the event that launched the fight
for the heart and soul of America.

These fine folks (The Courageous Corps of ’74) were the first Culture War victims of Fake News and they suffered the wrath of the vicious left.

No edited media interviews. No slanted research papers. No censorship.

See many photos of the protesters in action—including peaceful protesters waving flags and praising God as they are arrested and mothers being roughed up for refusing to leave the board of education office until the superintendent met with them.

PROTESTER VOICES IS A BOOK LIBERALS WANT TO BAN AND BURN
See how Protester Voices has been censored and suppressed.

SADLY, MANY CHRISTIAN AND CONSERVATIVE LEADERS
HAVE BEEN BRAINWASHED.
***Now they can find the facts at Textbook Protester Truth.***

BECAUSE THERE ARE SO FEW PREACHERS AND OTHER CHRISTIANS NOW LIKE THE
COURAGEOUS CORPS OF ‘74
AMERICA IS CORRUPTED!

WHAT OTHERS SAY ABOUT THE BATTLE AND THE BOOK:

DR. ADAM LAATS (Assistant Professor and Director of the Center for the Teaching of American History at Binghamton University) “For those who hope to understand Fundamentalist America in the twenty-first century, a good place and time to start would be Kanawha County, West Virginia, 1974...The fight in Kanawha County, as argued by both protesters and historians, can correctly be seen as the birthplace, or at least the midwife, of an emerging populist conservative movement... Thanks to the energetic activist Karl Priest, we now also have an account of the controversy written from a prominent member of the movement itself.”

LEE STROBEL (best-selling Christian author) featured the Textbook War in chapter one of The Case for a Creator.

LARRY PRATT (executive director of Gun Owners of America) said, “The Textbook War was one of the major battles of the cultural wars.”

CONNIE MARSHNER (national conservative leader) declared that the 1974 protesters had “old-fashioned American virtues” and they” woke up the rest of the country.”

ROBERT K. DORNAN (former United States Congressman) said that the media discovered that something was wrong with American education “thanks to the drama of the Kanawha County (West Virginia) textbook battle.”

JOE L. KINCHELOE (Research Chair at the Faculty of Education, McGill University) said, “The Kanawha County textbook controversy set the stage for some profound changes in the political landscape and in American education…Before the 1974 protests, conservative and fundamentalist parents sensed they were powerless…The success of the anti-textbook forces in Kanawha County gave conservatives around the country a new sense of confidence…In just a few short years the movement had gained so much momentum and influence that presidential candidate Ronald Reagan was pledging to support many of the goals of the protesting parents.”

KEITH CRAWFORD (Professor of Education in the School of Education at the University of Newcastle, NSW, Australia) said, “We see in the attitudes of Kanawha protesters a perception that, throughout the 1980s and 1990s, gathered significant support in America and continues to appear in the grassroots politics of the libertarian and conservative Tea Party movement, that of local, state and national bureaucracies that are said to treat ordinary people with disrespect...The success of the Conservative movement throughout the 1980s and 1990s that spawned, among others, Jerry Falwell, Rush Limbaugh, the Heritage Foundation, Ronald Reagan, George W. Bush and Karl Rove was not foisted upon the American nation through a right-wing conspiracy but emerged from the fears, ambitions and politics that were a consequence of incidents such as the Kanawha dispute.”

PAUL COWAN (author of The Tribes of America) called the textbook war “a cultural revolution” and “a fight over America’s future.”

EDWARD B. JENKINSON (Professor of English Education at Indiana University) said, “West Virginia’s Kanawha County captured the attention of millions of newspaper readers with its textbook controversy in 1974…Kanawha County’s story was reported from coast to coast…”

CAROL MASON (Liberal professor, in her journal article “From Textbooks to Tea Parties: An Appalachian Antecedent of Anti-Obama Rebellion”) “(T)he 1974 Kanawha County textbook controversy will continue to prove important to scholars, who have already noted its significance to American history.”

The HERITAGE FOUNDATION launched itself into national prominence by becoming involved with the 1974 Kanawha County, WV Textbook Protesters.

The PEABODY AWARDS (the most prestigious honor in electronic media) designated “The Great Textbook War” as a “thoughtful, balanced and gripping radio documentary that shows how a 1974 battle over textbook content in rural West Virginia foreshadows the ‘culture wars’ still raging.”

The EDWARD R. MURROW AWARD was presented to the "The Great Textbook War" documentary.

During a PEW FORUM on Religion & Public Life, Professor Todd Gitlin (Columbia University) said that the Textbook War “has been called the pivotal moment in the right wing recovery movement.”

The ALFRED I. DUPONT-COLUMBIA UNIVERSITY AWARDS went to "The Great Textbook War" documentary and stated that the 1974 debate “set the stage for today’s Tea Party movement” and “foreshadowed today’s populist revolt and polarizing political debate.”

A CHARLESTON GAZETTE editorial said, “Without a doubt, the textbook controversy heralded the post-1960s rightward shift in American culture and politics.”

A MONUMENTAL PBS VIDEO DOCUMENTARY features the Textbook War. “With God on Our Side Episode II: The Zeal of Thy House, 1969-1974” credits the event with being a major part in birthing the “Religious Right.”

A SCHOLARLY BOOK (The Big Sort, Bill Bishop) devotes a whole chapter to the Textbook War.

AMERICAN RADIO WORKS features Protester Voices as an alternative to a liberal book about the protest. (http://americanradioworks.publicradio.org/features/textbooks/links.html)

Read a REVIEW from a local newspaper supplement.
(http://www.insectman.us/testimony/review-protester-voices.htm)

DR. JOSEPH MASTROPAOLO (renowned scientist): “Karl Priest was in the textbook battle from the beginning and still is on the front lines. He does not give the secondhand accounts found in the biased media. Bravo Karl Priest and the protesters!”

SOMEONE WHO READ THE BOOK: “It would be impossible not to be affected by this book.  I never understood anything about this issue before other than the fact that it had happened.  I did not know the players involved (other than I always ran into references and articles about Alice Moore in censorship articles).  Your book filled in so many gaps for me.  I was really shaken by it, also.  I'm truly not one who sings high praises of very many books.”

The dramatic documentary INDOCTRINATION featured a segment on the Textbook War.

Here is HOW THE KANAWHA COUNTY TEXTBOOK WAR IMPACTED THE ENTIRE NATION.

EVERY CHRISTIAN, CONSERVATIVE, AND TEA PARTY PATRIOT
CAN LEARN
AND
BE INSPIRED!

Protester Voices can be purchased on Amazon or obtained from the author for $2.00 (plus shipping) within the USA.  This price is for the remaining copies of the original publication. Make checks payable to Karl Priest. All profits go to Exodus Mandate.

THE 2019 REVISION CAN BE FOUND ON KINDLE.

FOR FOOT-TAPPING ORIGINAL 1974 TEXTBOOK WAR MUSIC
listen to
THE TEXTBOOK TEA PARTY THEME SONG.
The sign held by the arrested protester reads: "God is not a myth to our children.”

The voice of one crying in the wilderness,
Prepare ye the way of the Lord, make his paths straight.
(Mark 1:3 KJB)